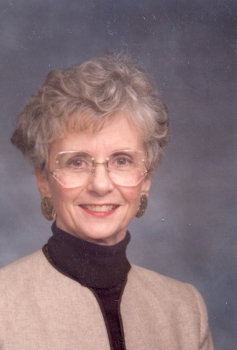 “Boo” was born July 1, 1933 in La Porte, Indiana, the daughter of Cyril R. and Isobel R. (Douglass) Parker. She attended Swarthmore College and graduated from Indiana University where she met her future husband David and was a member of Delta Delta Delta Sorority. Her husband of 52 years, Dr. David E. Laycock and her parents preceded her in death.

She was involved with the Carmel-Clay school system and retired as an executive secretary after many years. “Boo” was also a member of St. Chrispother’s Episcopal Church , P.E.O. Sisterhood, Tri Delta, Carmel-Clay Historical Society and an active member of the White River Sounds Chapter of Sweet Adelines International as a Regional Board Member and past Chapter President.

Survivors include her daughters P. Kelly Forey (Steven) and Kathryn “Kaki” Merritt (Christopher), her brother Douglass Stott Parker, her grandsons; David Scott and Christopher Steven. In addition to immediate family, “Boo” had 13 nieces and nephews. The calling will be held at 1:00 pm Saturday, September 13, 2008, at St. Christopher’s Episcopal Church, 1402 West Main Street, Carmel, IN 46032, immediately followed by a Memorial Service at 3:00 pm. Inurnment will take place at Crown Hill Cemetery at a later date.

In lieu of flowers, memorial gifts may be made to St. Christopher’s Episcopal Church or Ovar’coming Together, 3050 N. Meridian Street, Indianapolis, IN 46208. The family would like to give special thanks to Companion Care Connection, who provided wonderful home care support. “Boo” was loved by so many whose lives she touched; she will be deeply missed.