This picture was unidentified for a time, but Fred’s great granddaughter decided it must be Fred Clemons, based on its similarity to several older pictures like the one below. I think that is a good match. His good looks probably contributed to his favor with the ladies.

Early on in my research, my first clue that one of the Clemons family was in Michigan was the listing in his father’s probate records, of a son Alfred, living in Tuscola, Michigan. If I had not seen the probate records, I doubt I would have found Alfred so readily, as all the rest of the family stayed in NY state.

There is a story that Fred was discharged in Atlanta and had to walk all the way home to Michigan. Arriving in Tuscola about dusk he saw a lady through a window and said that was the girl he would marry.

I think this is a tall tale that was exaggerated by repeated telling. Sounds like Fred was an all-around good guy who likely told a few stories himself, or at least elicited stories on his behalf.

In fact, he was mustered out in Alexandria, Va. and he is listed in the 1865 census in Oswego County, NY with his parents and noted “formerly in the army”. At this time his first wife, Ermina, and her parents were already in Tuscola. He likely went to Tuscola after his service tour and he was married to Ermina in 1870 by the Justice of Peace in Tuscola. 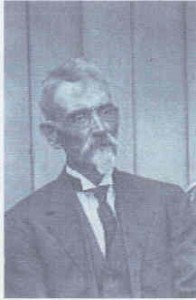 This is not the picture of Fred Clemons that accompanied the article reprinted in the Douglass Digest but it is very similar. The one pasted on the page with the clipping was too faded to copy well.