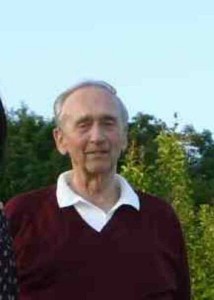 It was with real sadness that I learned that Bill Mayberry had died 5 October 2006. I wish that I had gone to England in time to meet him.

He sent me two very interesting letters a couple years ago and I want to share parts of them with you. He did not type and so both long letters were handwritten which I so much appreciated.

His father, Frederick Mayberry, was an electrical engineer who worked at the Canadian National Exhibition in Toronto where he was in charge of “all things electrical”.

Bill: “As a kid Exhibition time in Aug/Sept was a great 2 weeks. My pals and I got free passes, and I used to get up in the roof of the grandstand and watch the lighting men at work on the pageants they put on – with all the big stars such as Danny Kaye and Jimmy Durante….

“Then there was the Winter Fair and all the wonderful produce. He’d come home with boxes of Macintosh and Northern Spy apples, tubs of butter and prize-winning roasts of beef…

Related to the oft-told story at Mayberry reunions of how his parents met, this is his version:

“When Dad was wounded at the Sommes in Sept 1916 he was a sergeant in the signals branch of the Canadian artillery. After time in hospital in Paisley, Scotland, he was sent down to Witley in Surrey as an instructor at the signals school. He was selected for officer training and was commissioned as a lieutenant in early 1917 I believe – perhaps it was nearer to summer.

“In any case in summer 1917 he and a brother officer found themselves in a canoe on the river Wey, a small stream which runs through Guildford. Meantime Cicily Sarah (known as Sally, and in her later years as Sarah) had left work in Miss Smythe’s lady’s wear shop in the High Street and was out for a walk with her sister Dorothy – known as ‘Dumps’. As the canoe approached the girls were crossing the bridge and according to mum, dad said to his friend ‘See that little one -I’m going to marry her’. I can’t recall exactly how they met but a few months later, in January 1918, they were married in St. Nicholas’ church, Guildford.”

*Note: When Lineage is given, the name in Bold denotes which of the nine siblings is that person’s ancestor.

After his parents Frederick Coates Mayberry and Cicily Sarah Stredwick, married in England, Fred brought his bride back to Canada where Bill was born and grew up. But when he got a chance to go to England, Bill moved his young family there and found a place in Somerset they loved.

Bill worked as a mechanical engineer and his specialty was pumps – the big ones. He worked for Allis Chambers in the USA for 18 months before moving back to Canada and then to England.

Bill: “As for Allis Chamber’s farm machinery division my recollection is that it was located in Cincinnati, but in Milwaukee it was industrial machinery. For the big stuff – turbines, generators, large pumps, condensers – there was a 1000 ft. long main assembly hall at West Allis – quite wonderful – and now I believe all gone.

“Pumps ranged from high pressure units of several thousand#/sq. inch to large water supply sets and chemical refinery and paper mill designs. My specialty back in Canada was paper mills – over here it was more chemical and refinery.”

Bill and his wife, Kay, had four children; three live in England and France and one daughter lives in the States.