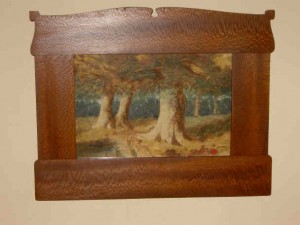 One of the contacts over the summer (2007) was from a gentleman who was researching Eleanor Douglass on the internet and found my articles about her. He wanted to let me know that he has one of Eleanor Douglass’ paintings. He graciously sent me the above photo of it. He noted that he is an avid collector of American arts and crafts decorative arts and just loves the painting. (It looks like it has found a wonderful home.)

This gentleman, who preferred that I not use his name, said that he picked it up in an antique shop in Frederick, MD about ten years ago and that it is in a marked Charles Rholfs frame which is dated 1903. He further added that Rholfs was one of the leading arts and crafts furniture makers and from Buffalo, NY.

The year 1903 fits well into the time period that Eleanor was living in her little house in Willink, near East Aurora, and exhibiting in the Buffalo art shows. This painting is typical of those Eleanor painted and similar to the ones her second cousin, Carl Ahrens, patinted. Eleanor and Carl spent some months painting together on the Saugeen Indian reservation near Southampton, Ontario. They were related on the Gaukel side of the family. (Eleanor’s mother was Polly Gaukel)

3 thoughts on “Painting By Eleanor Douglass”