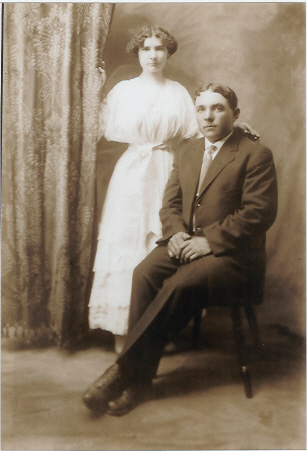 Mary Jane and her husband, Ben French homesteaded in Cloud County, KS, in 1870. Their oldest son, Ethelbert, was born in Canada before they moved to Kansas. Ben French, his brother, Nick, and his sons owned many acres of wheat land in Cloud and Grant counties, Kansas. Ethelbert, or “Bert”, married Jane White and they had four daughters, the third was the Bernice of this picture.

Bernice French married Frank Nelson in 1912. Frank was born in Kansas but his parents were born in Denmark. Frank Nelson had a Nelson family history that goes back many generations which is now in the possession of his grandson, Ron Nelson.

I visited Ron and Jeanette Nelson last year in Topeka and they were most helpful to me in sorting out the various families of Douglass lineage that lived and continue to live in Kansas.

Frank Nelson was a farmer for most of his life in Cloud county, KS. He died in 1975, and Bernice remarried. She outlived her second husband, Archie Rice, and Frank and Bernice are both buried in Delphos, Kansas.

Bernice was a 3rd cousin to Ethel and Elsie Douglass, to Cecil Douglass and his sisters, to Lincoln and Bruce Douglass, to Earl and Alfred Taylor and 2nd cousin to Harley Mayberry. While we manage to keep track of our second cousins usually, by the time the relationship reaches another generation of divergence, we lose track of the connections. If you should ever have a yen to go to Kansas I can give you the addresses of some kinfolk you might have a great time visiting.