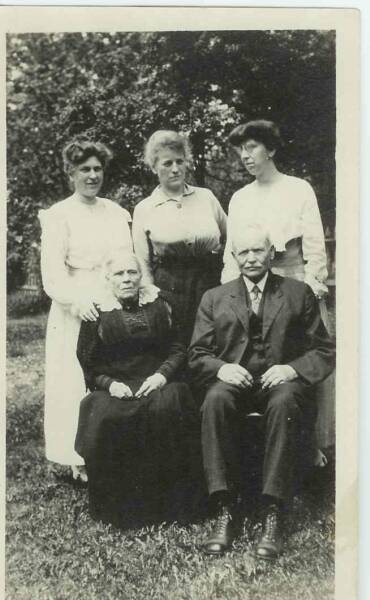 Susannah Douglass, who preferred to be called Susan, oldest of J.Chester and Lucilda (Cady) Douglass’ seven children born on Pillar Point, Jefferson County, NY, was a diminutive person especially noted when seen with her husband, Charles Emerson, who was a good sized man. In a group picture of a Douglass reunion, it is easy to pick them out. He will stand taller than nearly any man there and she will be smaller than any woman.

This picture was taken two days before Susan’s 74th birthday. Their three daughters in the picture, left to right, are Flora, Margery and Zida.
Margery, whom we would call a “full figured woman”, and in her day, “buxom”, never married. A registered nurse who did private home nursing, she was living in Cleveland, Ohio, when her father died in 1929. Some of her Grandmother Lucilda (Cady) Douglass’ family lived near there and she may have been employed in nursing duties for them or their friends. She died in East Rochester, NY at the home of her sister, Flora, in 1939 at age 69.

Zida, also a registered nurse, worked in private homes, in hospitals, and ran a nursing home for a time. She was married three times. Her only child, Harlon, was born of her first marriage to Irwin Walrath. This marriage ended in divorce and in 1910, she and her son were living with her parents on their farm near Sackets Harbor. In 1920 she and her second husband, Armstrong VanAman, a glass blower, lived in Rochester, NY. They were living with Dr. Harrison Potter and his wife Rhoda (Lane). This may have been a convenient arrangement. She may have taken referrals from Dr. Potter, or worked in his office. They knew each other from Sackets Harbor. Rhoda was a niece by marriage of her sister, Flora.

Flora married Charles Lane. Charles Lane’s parents were born in England and came to the United States as newlyweds. They had three sons who lived to adulthood in Sackets Harbor. Charles was the youngest. He married later than most men of his day. He and Flora married in 1892 when Charles was 36 and Flora 19. Charles eventually left his bookkeeping job in Sackets Harbor and moved to E. Rochester, NY, where he sold real estate and insurance. His oldest brother, Henry, ran a store in Sackets Harbor for many years and was a politician to be reckoned with in Jefferson County, sometimes referred to as “Boss” Lane of Hounsfield. (Henry was Rhoda Lane Potter’s father.) His brother, Albert, was a pioneer in Wyoming, a merchant, stock trader, and eventually a bank president.

Flora and Charles Lane had two sons. Harold and Clare. Harold’s descendants live in Rochester, Long Island and Spain. Clare’s live on the west coast and in Maine and Vermont.

One thought on “The Charles Emerson Family”