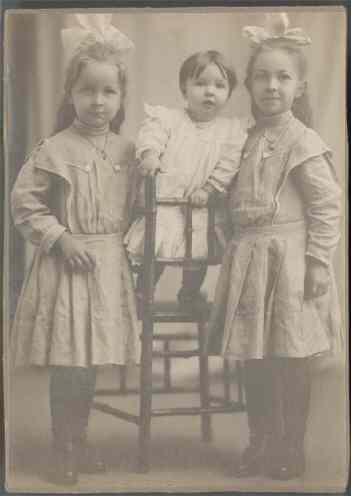 Isn’t this a great picture!

Just look at those dresses! And the expression on the baby’s face is priceless. This picture was taken about 1910. The girls are Grace, Louise and Beatrice Robertson, granddaughters of Dr. and Mrs. John G. Douglass.

I have written about this family before. Beatrice Douglass married a Scotsman, William Deas Robertson, (article in July 2003 Digest) in Chicago, but in 1912, they had to move to California in hope that the climate there would help William who had contracted tuberculosis.

After William died, Beatrice raised her three girls, who all married and stayed in California. Louise, always called “Honey”, died just six years ago (in 2001).

The picture was sent to me by Jennie Trerise, granddaughter of Beatrice Robertson. Sorry for the blurriness, due to having to change the resolution for the webpage.