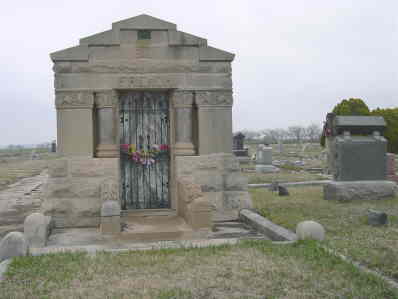 Situated on a knoll less than a quarter mile from Ben French’s old homestead is the Fairview cemetery near Jamestown, Kansas. It is often called the French cemetery. Many of the French families are buried there. This is a picture of the French mausoleum which dominates the cemetery.

Considering when the first burial was made in the mausoleum, I am guessing that Ben French purchased it on a trip to the 1893 World’s Fair in Chicago. This is just an idea of mine based on the fact that mausoleums were one of the many new things that were featured at the Fair and Ben would likely have attended. Over 27 million Americans – about half the country’s population – attended in the six months The Fair was open. It was a big deal. (For an engaging account of the building of the Chicago World’s Fair, read “The Devil in the White City.”)

For a previous article about the French family of Kansas, look in the Douglass Digest Archives for the January 2005 issue.